Dylan on the Cuyahoga

Dylan on the Cuyahoga

Only a few feet of air between me and Bob Dylan last night at Nautica Pavillion. Before Dylan and his five-man band took the stage, Leon Russell played a set of rock and roll standards with plenty of blues. Looking a hundred years old, and backed by a band who look barely outa high school, Russell can still bring it.

And then came Dylan himself, the poet laureate of rock, in his custom suit and white-with-black-tips cowboy boots and his straw hat, gravelly voice mumbling his brilliant lyrics, riffling the keyboard and chanting and bobbing and blowing the harp. He’s still got it, that magnetism that brought him into the spotlight decades ago.

I have spent a half dozen car trips to and from Columbus playing and replaying Blond on Blond to wrap my head around some of Dylan’s more complicated lyrics. There are few singer-songwriters whose work more seamlessly transmit as poetry. 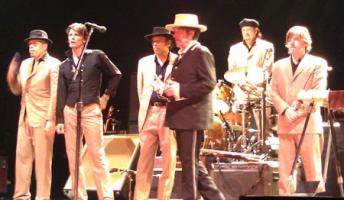 Thanks to Brian, one of my favorite people in Cleveland, we had seats in the center of the front row. I’ve never seen a concert that close up and personal. But from the moment Dylan stepped onstage, nobody was sitting. Leaning on that front rail, we could see the sweat drip and fly from Dylan’s face, we could see the rings on the lead guitarist’s fingers and the expressions shifting his face as he bobbed between bandmates and the master himself.

Behind the stage we watched the sky pink and then darken. Huge ships slipped past on the Cuyahoga River, looking close enough to touch. The rusty hulk of a drawbridge framed one corner of the pavilion tent. Swallows and pigeons swooped over the river and the lights of the city shone on the other shore. It was a jewel of a Cleveland night.

Earlier, while we waited for the concert to begin, I scanned the crowd. Nautica is small, as outdoor, stadium style venues go. Even the nosebleed seats have a good view, and the setting is delicious. The day was hot and muggy but by concert time it was cooling down and a little breeze stirred at sunset. The crowd was as white as any I’ve seen, and every single musician—every single roadie, even—who hit the stage was white and male. I remember times when Dylan recorded and toured with a more race and gender mixed band, but not this time.

You’ve got to love testosterone, to like rock concerts. You know that old saw, Why does the guy play in a rock ‘n roll band? To get the girl. (Why does the guy do anything? To get the girl—or boy, as the case may be). The soul of rock music is instinct and energy-driven, even for a rocker like Dylan, whose lyrics are smart, beautiful poetry. At base that energy is sexual. This applies as much to girl bands. Testosterone is a hormone shared by all genders. It propels sex drive, assertiveness, and some other traits that are far from exclusively male, but which we associate with masculine drive.

So if you don’t love those things, just download the tunes, buy the CD, don’t torture yourself with the Dionysian feast of a stage show. The primal force of both these bands was intensely and undeniably sensual, and anyone who has ever closely observed a rhythm guitarist or a drummer or any other rock or jazz musician perform live, knows it.

Today it’s back to being a responsible grownup, catching up on work and family obligations—and of course, the books—still savoring the images and the songs and the nearness of this icon of a generation.

Disasters and Delights on the Long Road